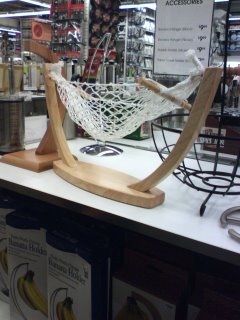 First off, this is a camera phone picture. Pretty gosh darn good quality for a phone don't you think?

K, so it's a hammock for bananas. What do you think the sales pitch for this was. "Yeah, so here's the thing see. You're gonna want your nanas to breath right? Get some air right? Toss a banana in there with a couple of plums maybe and it'll be like they're ripening in the tropics. And the women love it too, clears up a bunch of counter space. So, what do I have to say to put you into one of these banana hammocks today?"

Email ThisBlogThis!Share to TwitterShare to FacebookShare to Pinterest
Labels: being weird

I'm an adult, I assure you. 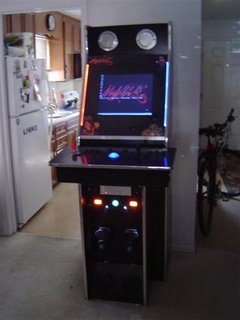 I've been thinking about making one of these for a few years now but it wasn't until my neighbor Mark put one together that the wheels really started turning for me. His machine kept with the traditional size and look of 80's arcade machines but I knew I wanted to break from that a little.

I wanted to go minimal with the thing. Seems to be the running trend with me these days. Initially I contemplated using fiberglass and wire mesh for the shell. I thought some nice curved edges and a smooth fluid finish would look appealing but if you've ever worked with that stuff in large doses, you can probably figure out why I shied away. I went with 3/4" fiberboard instead but it didn't make things much easier. I used an LCD monitor to shrink the top depth to about 7 inches. It appears very svelte from the side. It gets a little thicker at the bottom so the PC and subwoofer can have a place to live. The one real omission is a coin door. It may make it on there one day but I really don't feel like spending the money for one and why should I have to carry around quarters in my own house.

I think I enjoyed making it more than I enjoy playing it. It really is a great hobby because there is still so much more left to do. The high score display is almost finished, as you've probably already read about, and I hope to have the automatically rotating monitor function completed shortly after. And then there are more lights. You can never have too much lighting.

I'm still a kid at heart and it's kind of comforting to find out that at least one thing hasn't changed about me. I am still terrible at playing video games. It's a good thing I like making them. 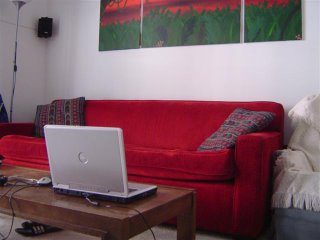 Looks comfy doesn't it? Sorry, comfortable. Pardon the informalities, these things happen when your new office is a couch and laptop. Hmmm, a red hot 8 lbs computing machine can never really be a LAPtop can it? And office really isn't all that accurate either. Call it a domicile command center... Excellent.

For the last couple of years I've been furthering the testing capabilities of the Tactical Electronic Warfare Division of the Naval Research Laboratory in SE Washington DC but I recently decided to part ways with that endeavor to explore other opportunities which at this point still remain TBD. I saw the proverbial fork in the road approaching on the horizon and felt that slowing down to delay the inevitable jerk of the wheel would only have caused doubt and confusion. Pedal to the metal baby.

Ok before I go on, how come the watermelon is the only inhabitant of my melon medley that has seeds in it. I understand that cantaloupe and Honeydew have their seeds hidden within their interior crevice but wouldn't they also benefit from the increased seed disbursal of even flesh seed distribution that watermelon enjoys upon its end. Watermelon probably had some tough decisions to make when faced with picking it's method of procreation. It probably counted on a high seed density and a tough striped shell to dissuade predators. Didn't consider beings with reasoning skills and opposable thumbs didjya. The jig is up dude. Your seeds are more a nuisance than anything else. I'm gonna eat you anyway, let's get those little baby watermelons in the middle where the belong already, k?

So on with rebuilding mind, body, and soul. The technology necessary to become a cyborg is not yet available so I'm pretty much all out of suggestions. I'll probably start with finding new employment. One thousand apologies but I'm afraid describing the details and nuances of a potential new job, that would be a better fit for me, is not appropriate for the format of this blog. I like to keep things short. I can tell you this though. I am excited for the change and I'm glad I had the courage to leave something with so much up side. If anyone has any non-cyborg related comments, feel free to speak up.
Posted by Evan Flint at 2:40 PM 1 comment: 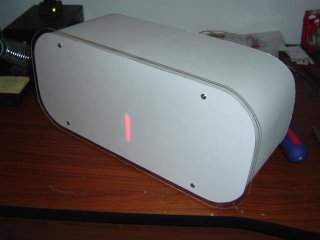 My Arcade Display project is almost complete. Actually, It'd be done already if someone didn't forget to add some critical parts to my last Digikey order. It's not important who so I won't mention it here. I was having trouble finding the perfect diffusion layer but alas, a quick walk down to my local Staples store produced the material I was looking for. I needed a substance that was thick enough to hide unlit segments yet transparent enough to allow a good amount of light through. A couple of ordinary legal sized sheets of paper "borrowed" from the copy machine worked out to my liking. You can see the results in the picture above. Clean design, huh? It really looks cool when whole words start scrolling across it. Curious, why didn't I take a picture of that. Check out my previous post to see what it looks like without the paper and plexi. 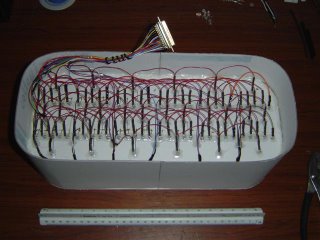 Oh, and check out the wiring job. It's like I've done this before or something. And I saved around $200 making the jumpers myself. I'm sure I'll regain the use of my fingers and eyesight any day now. How am I writing this post you ask... smell and taste. I play pinball the same way.

So, what's next. When my RS232 level converted arrives, I'm gonna connect this baby up to the Arcade's PC and rock some old fashion serial communication. The goal is to display game names and high scores when playing MAME and artist/song names when playing music. I'll have to dust off my Visual C++ skillz for that. Stay tuned for updates.
Posted by Evan Flint at 3:39 PM No comments: 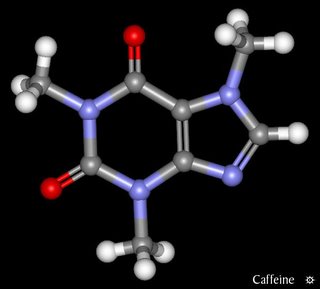 As I exhaled, water vapor formed a cloud of exhaustion in the night sky. The moon angled itself perfectly to fill the alley with more than its fair share of borrowed light. The dumpster moaned disapprovingly as I hastily slammed my battered body against it. There was no time and little shadow from which to choose. I quickly gathered my thoughts in hopes of stemming the inevitable feeling of panic. I was playing right into his hands, deep breathing and elevated heart rate was just what he wanted. But ironically, I knew that's exactly what it would take to defeat him. The uneven pavement in front of me revealed newly formed puddles that made it difficult to tell where the ground stopped and space began. Dark water stowed aboard the fringes of my overcoat as I knelt at the ready. A dull cranial ache nudged my resolve. My hand instantly cupped the infected area as if I could rub away the sensation.

I knew that I couldn't hide here forever. Thoughts of escape forced their way into my head. The fence at the near side of the alley would assure me this same fight tomorrow. However, there was a reason I sought this foe and a reason I rested here. The sounds of footsteps and fleeing pests, echoing through the brick corridor, would make this decision for me. His slow, mocking gate, almost dared me to run. I came here to pick a fight and now I find myself cowering in doubt. Caffeine, you've ruled my actions for way too long. I am e-unit and this ends now.

I sprung free of the dimly lit shelter. My clothing held on tight and struggled to keep up. I turned to meet the gaze of my silent antagonist. He was 20 feet away but still close enough to make out his sharp features. "You wake me up and then steal my sleep. You promise me flight and then clip my wings". You hide under guise of taste and color. Why?" A shallow smirk crawled upon his face. There was no remorse in his stance nor attempt at empathy on his brow, just assimilating determination. I suddenly realized something important. This was going to be fun.

I moved forward with the silence of fabric waving in the breeze. A Wiffleball bat leapt from my coat to deliver a fatal blow. It met its counterpart and sent us stumbling. A quick step to the left and then a momentum forming spin to the right joined our bats once again. My slow and steady striking style was deflected easy by his staccato defense. He fought as if not to win but to wear me down, like it was a game to him. How wrong I would be. He unleashed a flurry of blows that seemed to gain in strength. I backpedaled to maintain distance. Tremors of frustration and haste grew on his posture at an unnatural rate. He gained speed and sheets of translucent yellow replaced his once solid weapon. He stabbed for my chest as I simultaneously spun to avoid the advance. His lunge took him too far and I parried his saber at the hilt. Caffeine fell to its knees as the Wiffle weapon hit the ground. My bat wavered in front of his face as I struggled to regain breath. "What are you waiting for", he said with a look or ennui. "You know you can't kill me. Whenever you study for a test, I'll be there. Whenever you wake up early to catch a flight, I'll be there. Wheneve...."

The bump on his head will heal, but I don't envy the headache he'll have tomorrow. I know he'll never go away but that won't stop me from fighting him. I like not crashing in the early afternoon and being able to go to sleep at night. Caffeine, don't come snoopin around my house if you're not lookin for a beating. See ya around the office..."friend".
Posted by Evan Flint at 10:04 AM 2 comments: