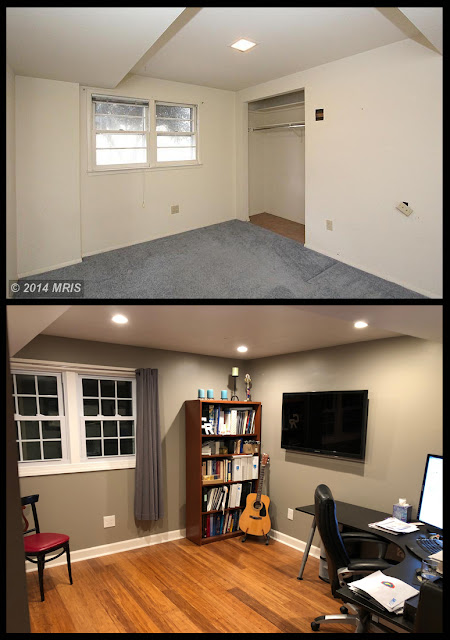 This is our guest room/office. It's in our lower level and right next to the rec room that I wrote about recently. I lot more work went into this room than you might think. I wanted to maximize the livable area so I knocked out the wall that formed the closet and claiming about 2 feet of space from the utility room. I'll write about how that worked in the next post. I addition to increasing its size, we wanted to add a lot more light to this cave. Four recessed fixtures should do the trick. Wiring them up was a breeze because I had access to the ceiling joists from the utility room and the rec room which both have Ceilume (removable ceiling tiles) installed. Oddly, my track record hasn't been good in the lighting department so far on this build but this room ended up being lit perfectly... in my opinion. The bamboo flooring was continued on from the rec room and half bath. BTW, nothing in this house is either square or plumb. Decisions and calculations had to be made before even the first plank was placed in the rec room to ensure that the angles between floor boars and walls in the office didn't look too weird. I guess my trig teacher was right, I would end up using that stuff in the real world after all.  The room was buttoned up with a couple of brand new windows, some paint and wider baseboards. And there is one more thing... Ya know what, I think the muphy bed deserves its own post. 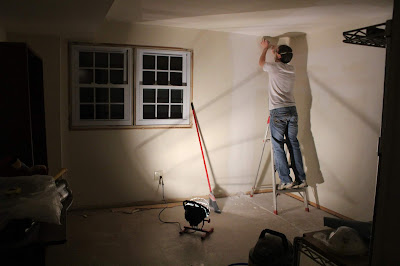 Some people ask me about when I get the time to do work. It's usually late and very dark ;)
Posted by Evan Flint at 10:02 PM No comments: 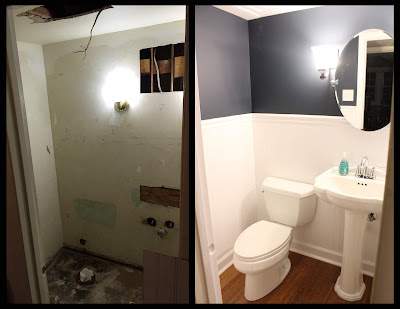 This is a half bath that hangs off the rec room in the lower level. Silly me thought that this part of the renovation was going to be easy. Just a little paint I thought. Maybe change some fixtures. How hard could that be? I'd be in and out in a couple days. You think I would have learned by now. 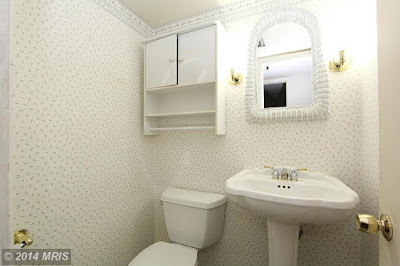 Ok, the before and after was for dramatic effect. This is what the bathroom looked like when I started. It was pretty clean and integral to the rest of the renovation effort because for a short time, it served as our only toilet. Problems arose when I began removing everything to strip the wallpaper. I now know why they put the paper up, the wall was in terrible condition. There was even a hole behind the mirror. Presumably it was the access the pipes or wiring. I enlarged it to do just that. The sconces on either side of the hole worked but didn't have gang boxes. They were screwed into a piece of wood behind the drywall. Top tip, don't do that. 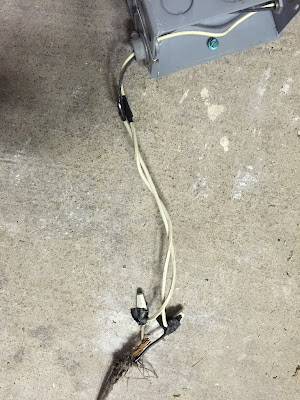 I'm glad I decided to explore the wiring further. I'm really not sure what to make of this. There was a metal receptical box in the wall but it was only loosely screwed into a stud and didn't have a cover. I think it was installed to so a wiring connection could be made within the box. Two splices were made but neither were in the box and they both involved a section of lamp cord. Again kids, this is something to avoid. At this point, I decided to rip the whole thing down and start from scratch.

I fixed the wiring, freshened up the plumbing with new copper pipe and valves and patched up the walls. Instead of replacing all the drywall, I skim-coated the top half of the room with mud and spent wayyyyyy too much time sanding. The bottom half of the room is covered in beadboard and trimmed out with chair rail molding. I found the design on Pinterest. Why re-invent the wheel. A keen observed would notice that I re-used the pedestal sink and toilet. They were both in really good shape so I lucked out there. I did change out the faucet on the sink though. It was my goal to remove every piece of gold colored hardware in this house. It wasn't easy.

The exhaust fan worked but was in desperate need of updating. I think the installer though this thing would last the life of the house because it was NOT easy to take out. Nails must have been on sale that week. And .... AND the ceiling drywall overlapped the nailing flanges so I had to cut out a bunch of drywall just to get a hammer claw on this thing.  Yikes.

My favorite part of the bathroom is the mirror. I must have stared at that thing for an hour trying to get the perfect amount overlap with the chair molding. There's no math here, just what feels right. Ya gotta shimmy and nudge until it snaps into just the right position. Then you sneeze and start over.
Posted by Evan Flint at 9:11 PM No comments:

Despite the transformation, it still feels a little weird spending time in the Rec Room based on what it was before. Our house is a split level and this room is part of the lower level which is partly below grade. The plus side is that we don't pay property taxes on square footage below grade, the negative is that we don't get much nature light down there. There was a dungeon feel for sure. This fact coupled with six inches less of ceiling height compared to the rest of the house made for some design challenges. 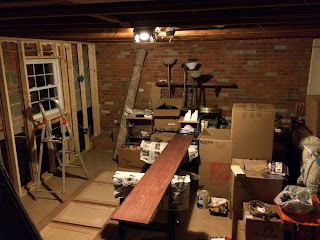 This room was demoed on day one. My friend Nick was visiting the DC area from the middle east and requested to come over and break something. We sent him downstairs with only one instruction... destroy.  I think he enjoyed himself.

As you can see, everything was taken out. The carpet was removed, the wood paneling was removed, the shelves were removed and even the ceiling was ripped down. It was all necessary, I'll explain why. The carpet was showing many years of pet and water staining. This was a no-brainer. I was hoping that the wood paneling was hiding a stud wall but I wouldn't be so lucky. Under closer inspection, the wood paneling was nailed into furring strips and the electric receptacles were recessed into the cinder block. I probably could have gotten away with putting drywall on the existing strips but adding sconces would have been a real pain. And framing up a wall would give me extra insulating power for an already chilly basement. 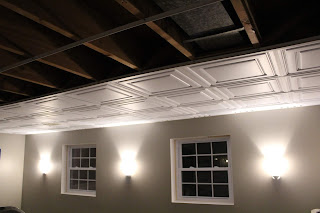 Replacing the windows wasn't in the original budget but I figured I'd look into it while the wall was open. Apparently Home Depot has been doing their homework because they actively stock windows with the required rough openings for houses in my neighborhood. Every window is basically a custom job so they make a huge order and shelve up windows that they know people in the immediate area will need. Brilliant. Installing replacement windows was far easier than I thought it would be. And cheaper too!

I love it so much, I really should do a whole post on Ceilume.  The existing ceiling had to come down for a number of reasons but the main reason by far was that it gave me an excuse to put these beautiful tiles up. The main advantage is accessibility. Now I have access to plumbing, electric, HVAC, entertainment wiring, and network wiring. All of which I have worked with. I even put in sound deadening insulation so I can watch Game of Thrones without waking the kids. That stuff is great. 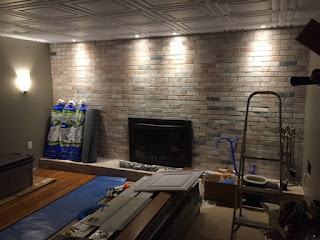 I waffled on what to do with the fireplace brick for a very long time. Months I think. There are those that think painting brick is a sin. I didn't go quite that far but paint did factor into the solution. I applied a white wash faux finish and down-lit it with MR12 recessed lights. I applied the finish by brushing on a 50/50 mix of white paint and water. After applying approximately 4 square feet of paint, I took a rag and gently rubbed off the excess. It was a painstaking process but worth it.

We chose 5" carbonized bamboo interlocking planks to lay down the floor. Since it's going over concrete, the boards are floating. If you value your back, don't put down hardwood flooring by yourself. 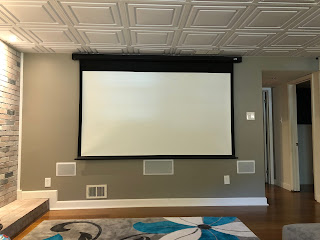 Now we're getting to the good part. No house is complete without a HD projector and 100" retractable screen ;) And ya gotta have the in-wall speakers. The look is so clean. I've actually wanted to have a home theater set up like this for a long time. It's not in the perfect space by far but it still delivers on the theater experience in a big way. I am pleased with the way it turned out.

Posted by Evan Flint at 2:25 PM No comments: