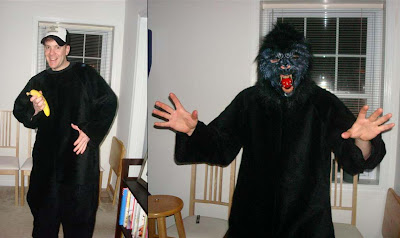 My neighbor throws a pretty mean jungle themed party every year and I like to participate whenever possible.  Which is pretty much every year since this party is not to be missed.  I've wanted to go ape for a couple years now but didn't have the tools til recently. I could have bought or rented but it's kinda of expensive and what would I have learned?

Having a sewing machine is key when putting together a large costume. It made short work of the long seams necessary in what turned out to be a basic jumpsuit made out of fake fur. I got a vintage '70s pattern from ebay for around 3 bucks and the fabric from Jo-Ann Fabrics for less than $30.  Where would my hobbies be without ebay? The picture on the left is a part realization of the initial concept which involved the ape suit and my wife dressing as Jane Goodall.  The trucker hat would have said something like "I'm with Goodall".  We scrapped the Goodall portion but I made the trucker hat anyway. I went with something slightly vulgar for the hat epigram to fit the anticipated party atmosphere.  I borrowed the mask from my friend Otto for the few minutes during the party.  Good thing too, the costume/mask combo got quite hot.  I could never be a real gorilla.

I learned a few things about following patterns and judging size and fit but I still have a way to go if I want to put together a more form fitting ensemble.  I'll just have to keep on practicing.  It's a good thing I have plenty of time before the next Santa suit bar crawl.  The wheels have already begun turning on that getup.
Posted by Evan Flint at 3:18 PM No comments: