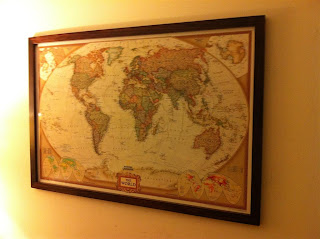 I bought a 20 dollar world map a while ago and never got around to framing it until recently. The map is approximately 45" by 30" so it's safe to say that an off the shelf frame isn't going to do the trick. There are a couple custom framing shops around town but I knew Michaels had an extensive framing department and with my 55% off custom framing coupon firmly in hand I rolled out to one of my favorite stores confident I could grab up a sweet frame and not break the bank. And since the map was already laminated with it's own border I could forgo the matting and glass/plexi to save some dough. I truly thought I could step out of the store minus somewhere in the vicinity of 75 to 100 dollars. And yikes! I was way off. Even after the coupon, the least expensive option was about $250. I think it's safe to say I didn't buy a frame that day.  And $250 was pretty bare bones. You're not getting a fancy wood stain or two tone metal frame for that. Michaels, I still love ya but I'd have to pursue other options for my framing needs.  What was I going to do? 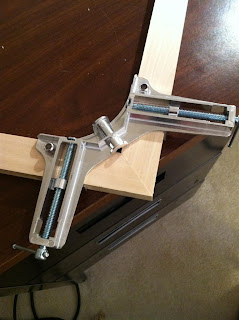 Let me start by saying that my wood working skills are minimal at best. I am aware of the necessary tools but own few of them. I had the cordless drill and screwdriver, needed to borrow the miter saw and router from a neighbor and had to buy a couple right angle clamps.  The clamps were only a few bucks at home depot and totally critical if you want to properly align the segments as seen in the picture to the left.  I also borrowed a router bit (1/2" rabbet) from work which was key because those suckers can be expensive.

You can find all the materials necessary to build this frame at Home Depot. I went with a 1x3" maple board for it's attractive grain pattern and light color. The color makes a difference when deciding on the stain color that suits you. I chose Minwax Red Mahogany 225 because it looked great and would be a close match to the furniture already in the room. You'll want to test the stain on a scrap piece of wood to make sure the color is what you want. For the protective coating, I went with a Minwax Semi-Gloss Polyurethane. I thought the gloss poly was a bit too reflective for my taste. I already had the wood glue, filler, sandpaper and assorted screws from a previous project but all can be purchased for under 10 dollars. 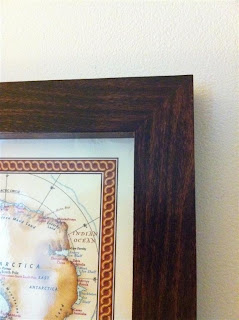 Before you start cutting, identify the portions of wood you want to face the outside world. And kids, remember the golden rule in woodwork...well, construction in general. Measure twice, cut once. Getting the measurements right when cutting and matching up 45 degree angles can be tricky so take your time. Don't worry if they aren't perfect, mine weren't.  This is where the wood filler comes in. A little goes a long way.  Check out the picture, looks dead on doesn't it. After you have glued screwed and clamped the four corners, apply the filler where needed and let dry. The frame actually looks pretty good at this point but looks even better when you hit the whole thing with some 220 grit sandpaper. Be sure to go with the grain and be careful around the joints. At this point the initial plan was to just tack the backer board to the rear of the frame but I decided to route out an 8th inch deep half inch rabbet instead to inlay the backer. Looks more professional from the front this way. BTW, had one of the guys at the Depot cut the backer for me. Saved me a bunch of time and trouble.  If I ever make a frame again, doing the routing before assembling the parts is totally the way to go.  I ended up having to freehand it.  The result was far from perfect but it's the back of the frame so no one will see it.

When it comes to applying the stain, follow the instructions on the can and you'll be just fine. I do have a couple tips though. I prefer foam brushes over rags. They are cheep, you can use them for multiple coats and they do a better job of getting into corners.  And mineral spirits between coats of stain and polyurethane are essential. Dust is not your friend in this situation. Use a sandpaper in the high 200 grit between coats of stain and something like 320 before the last coat of poly. That will give you the nice glass like finish you're lookin for. All that's left after that is to glue on the backer and tack on some wall mounting hardware and you're done.

We have some other picture frames in the room from Crate and Barrel that have a similar style so this fits right in. I could have used the router to round off the edges or cut some sort of decoration into the wood but thought something simple and understated was appropriate considering the look of the map it was framing.

The basement smelled like stain for a few days but that was worth it when I think about the couple hundred dollars I saved in the process. The overall cost came in at a little under $40. Take that Michaels!
Posted by Evan Flint at 3:08 PM No comments: