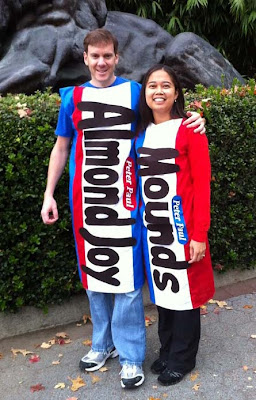 This Halloween costume idea wasn't an original creation. The concept came from internet research but I executed the design and construction. The cutting and sewing was pretty straight forward, however I do have a couple tips that seem obvious after the fact. Firstly, where men are usually roundest around the chest and stomach, women are typically laid out in different proportions.  Keep this in mind whilst essentially making a fabric tube.  Secondly, my initial design called out for cutting the small "Peter Paul" lettering out of fabric.  If you want to keep your sanity, do not attempt such a thing.  I made a stencil and used white fabric paint. If not pressed for time, I probably would have laser cut some 1/32" acrylic for the stencil but exacto-ing out some card stock did the trick.  Here is a bonus tip... hot glue! I tried attaching the larger brown letters with spray adhesive but that basically turned into really weak velcro.  Hot glue is your friend. If you don't already have a dispenser, I'd highly recommend picking one up. I personally like the 1/4" sticks the best but I do more fine touch gluing so that makes sense for me.

I get a kick out of putting together coupley type costumes. The trick is finding something that has most of its impact together but still works well on its own. My favorite part of these costumes was the public discourse they inspired. Almost everyone we passed by had a very strong opinion on what candy they liked more. I brought a bag of Almond Joys with me just in case they didn't see things my way ;)
Posted by Evan Flint at 11:36 AM 1 comment: