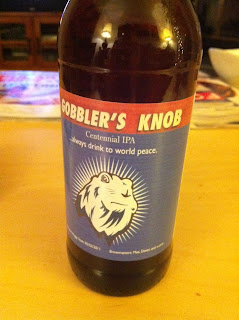 I've been gearing up to brew some beer at home for some time now, so when Maz and White Noise asked if I wanted to make a batch at Shenandoah Brewing Company I decided to join in figuring it'd be a good place to ask some questions. Indeed it was. SBC provides everything you need and takes you through the whole process from deciding on a recipe to bottling.  They must have a few dozen different varieties to choose from. They range from ales to lagers to hefeweizens and they'll gladly work with ya if there's something you'd like to experiment with. We decided on a India Pale Ale (IPA) made primarily with Centennial Hops. I don't have much information about that particular strain of hops other than it hails from the pacific NW and it's popular as well as tasty.  As you can probably infer from our label, we brewed this IPA on Groundhogs Day.  Boy, that hog sure is dramatic.  Took a bit of photoshopping, but I think the labels came together nicely. I Lifted the "Gobbler's Knob" right off a picture of the actual Punxsy Phil sign.

The brewing was pretty straight forward. The only part of the process that was prepared for us was the wort.  Wort contains the sugars that will later be fermented to make the all important alcohol content of the beer.  As I understand it, wort is made by steeping a mixture of ground up malted barley and grain adjuncts. The steeping creates an environment favorable for enzymes to convert starches into sugars. Apparently to make home brewing easier, malted barley extracts can be added to the grain tea mixture in lue of embarking on the malting process yourself. Good to know.

We started off by precisely weighing each stage of hops and gathering them into bowls. We took the bowls over to the kettle where the next hour or so of boiling would take place.  The wort is added to the boiling water first followed by the various stages of hops at predetermined intervals.  Boiling the wort accomplishes a few things.  It sterilizes the mixture, coagulates proteins and stop enzyme action.  Basically kills all the stuff living in the wort while extracting the desired color and flavor. The hops are added in intervals to balance out the taste and aromas.  Resins in the hops are broken down slowly and add bitterness to the taste while the oils from the hops evaporate quickly and add aromas. Adding the hops had to be done slowly because they threatened to boil over if done without care. A little bit of kettle tech came in very handy here. Instead of having a single heating element at the bottom, steam is funneled into jackets surrounding the kettle to add energy more evenly which gives you fine control over the temp of the kettle contents. There was no problem backing off the heat at any point because you can regain your previous temp very quickly. After the boiling is complete, the liquid is filtered and run through a heat exchanger where the temp is lowered to a point that is not hazardous to yeast cultures. We added a packet of yeast and rolled the plastic keg around on the floor for a bit to oxygenate the mixture.  Around 6 weeks later, we came back to bottle up our creation and take a taste test. The yeast gobbling up all the sugar will create a little carbon dioxide but a little more was added to give it that extra carbonated kick.  It was recommended that we store the beer in a dark place for at least two weeks before cracking one open. This gives the beer a chance to settle down and balance out after being carbonated.

Turned out to be a pretty typical IPA. Crisp and hoppy but not overly bitter. It's gonna be nice to drink on a warm spring day. The one major takeaway from this experience is that the world of beer brewing is immense. There are just about a million factors that go into the taste, smell, alcohol content and look of a beer. The hardness of the water, temp of brewing, species of yeast, type of hops, variety of grain adjuncts, process of malting, and a host of other factors all really matter. Kind of intimidating at first glance. Don't think that's gonna stop me though. I'll most likely try to recreate the Knob at home with my own equipment and see how that goes. Can't wait to blog about that.
Posted by Evan Flint at 3:56 PM No comments: