Our house used to have four bedrooms upstairs. Now it has three. Let me tell you why. We knew going in that the master bathroom (en suite) required a fair amount of work to function properly. Seeing as it was undersized by modern standards, I made plans to enlarge it. I'll leave those details for another post, but for now I will tell you that the best solution was to enlist the area of the walk in closet for the extra space required. I was not sad to see the closet go. Normally walk-ins are great but  ours was maddeningly inefficient from a geometric standpoint. And for some reason, it got wickedly cold in there. It needed to be gutted. For a little while I thought I could add closets to the existing master bedroom without knocking down a wall but it became obvious that the sledge hammer would soon be necessary.

In the "before" picture above, a wall once stood where you can see a break in the floorboards. Nothing is ever easy when you want to take out a wall. Don't let anyone tell you otherwise. Electrical, plumbing or HVAC, you will have at least two of these in every interior wall that you don't want. Transitioning wall registers to floor registers took a little magic but not much work. Reconnecting the broken electrical was another story. Large swaths of drywall had to be removed to make new wiring runs and much time was spent in the attic crawl space trying to make sense of the lighting.  This was two rooms, after all, so there were two light switches which controlled two circuits of switched outlets and two switches that controlled two ceiling fans. It's a good that I like this sort of thing.

I waffled for a while about what to do with the flooring. Do I stick with the hardwood or carpet the whole level? There is no easy answer. One thing was for certain though, I was going to have a pro do whatever I decided. I refinished the main level hardwood and vowed to never do that again. We flipped a coin and went with the wood but did set ourselves up if we ever wanted carpet in the future. I installed the baseboards 1/2" off the base of the floor so carpet could get tucked underneath saving whomever did the install the trouble of ripping out and reapplying the baseboards. Quarter round hid the gap nicely and made up for any inconsistencies in the floor level.

Like any bedroom, the space being absorbed into the master had a closet and entryway. Those doors would need to be removed and the openings covered with Sheetrock. With years of cumulative paint, the new drywall did not match the existing drywall width so I used some foam tape to "shim" the new panel. I made the mistake of not including the tape on the lower level and the mudding was a nightmare.

To spiffy up the room a bit, I finished it by installing new windows, crown molding, window and door casings, paint, lights, and curtains.  I also replaced the dated ceiling fan. Did I mentions closets? 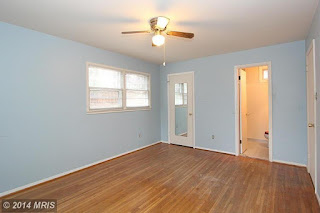 I've worked with the PAX closet system from IKEA before and I really like it. I installed three 49" units for a total of 12 and a quarter linear feet of clothes storage. Since they truly go floor to ceiling, they pack a surprisingly large amount of space. My little son Malcolm loves dancing in front of the mirrored doors on the single unit. 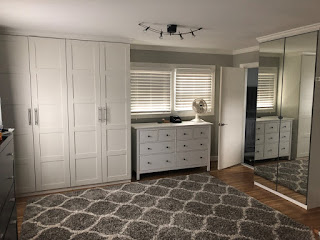 Losing a bedroom upstairs was a hard decision. We don't regret it though. The boys still have their own bedrooms and there is an extra bedroom downstairs for guests. Having the extra space in the master is really key. It's were the boys get ready in the morning and at night after baths. It's were they like to read books and do their gymnastics.We spend a lot of time as a family in the extra space which makes all the effort to combine the two rooms totally worth it.

Posted by Evan Flint at 1:55 PM No comments: