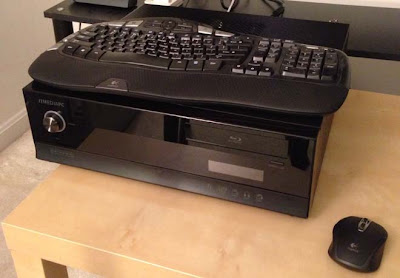 I recently built a home theater PC (HTPC) to address some of this. A HTPC can be any computing device capable of video and audio playback.They are built primarily to function as media servers but can be much more than that with the proper hardware and software. They can also be built to function as video recording devices similar to the DVR's that you may currently be using. Before the HTPC, I was renting a DVR from Verizon FIOS and had it hooked up to a flat screen monitor and stereo receiver in the living room.  This wasn't a bad setup but it didn't have all the functions I wanted, most notably a data backup solution, more than 2 television tuners, and additional DVR storage. I could have rented another DVR, bought external storage for it and purchased a network attached storage device for my data backup requirements but that seemed a bit kludgy to me so I went with a more elegant system. I'll outline my computer hardware and software below and talk about its capabilities to address what I wanted my living room media experience to be.

Many hours were spent researching the hardware that would eventually make up the guts of my rec room rig. A careful balancing act ensued between cost, performance, availability, and compatibility.  I wasn't on a budget but I also didn't want to break the bank. My goal for cost was to come in at or near what a decent network attached storage solution would run me. A difficult undertaking for sure but I already had a power supply, dvd drive, and hard disk storage so I was slightly ahead of the game. Various A/V forums around and about the internet were a huge help here. And to my delight, the newegg.com comment section for my targeted hardware gave great insight into what said hardware was actually capable of.

I heard raves about what Intel was doing with their integrated HD 4000 graphics.  I picked up the Intel i3-3225 processor because it was pretty much the cheapest Ivy Bridge processor with that particular tech on chip. The power savings with Ivy Bridge is paramount when you intend on leaving the computer running all day and night. At the end of the day, the main objective for the hardware setup is to play 1080 (full HD) video seamlessly and this is critical because even the slightest glitch would ruin the viewing experience. The i3 and HD 4000 combo did just that and surprised me with its performance. HD video playback seamed like an afterthought and it handled GTR Evolution (very realistic racing game) with ease. I'll explain the reason for installing that game in an upcoming post.  Another plus for the HD4000 is its HDCP compliance. Nothing new here since Microsoft's protected video path standard had been around for a while but it's nice to hear it reported that the hardware was drama free. I made sure the motherboard I picked out played ball as well.

Now that my HTPC was up to the task of serving up all the multimedia I could handle, additional hardware was needed to actually acquire the data I wanted. A good amount of video is available from various streaming sites but sadly most of the programming I enjoy still comes from the good ol cable companies. And yes, I'm including FIOS in the generalization. My distaste for the current availability and cost of content is well known but that's for another post. Enter the HDHomeRun Prime from Silicon Dust. This bad boy houses a cable card and serves up three tuners via your wired Ethernet network. This external network based solution is nice because any computer on the network has the ability to grab a tuner and you don't have to worry about a PCI based card fitting into your computer chassis. This is a problem with the Ceton InfiniTV 4 and some less expensive HTPC cases. The cable card is where you start to save money. It's about an eighth of the rental fee of a single box and less than a tenth the cost of a dual cable box system. We have three monitors in the house which amounts to over $40 a month saved in rental fees. There is a downside to cable cards though. Some cable companies have less than stellar support for the cards and barely willing to work with you on figuring out any problems that may arise. Luckily, setting up my card under FIOS was a breeze and it has worked flawlessly ever since. I was originally going to forego an optical drive but had to put one in to install Windows so I figured I'd keep it in there. Maybe I'll upgrade to a Blueray drive some day but for now I'll stick with the trusty DVD. We don't watch many movies from solid media anyway.

My  home theater setup sits across the room in my media cabinet so any wired peripheral is pretty much out of the question. Heck, I run a wireless keyboard and mouse on my office pc...the set in the picture above. I used them for testing. I already had a Logitech Harmony 550 remote control so I paired that up with a USB IR receiver for Media Center control. I rounded out the human interface with a wireless keyboard/trackpad combo which doesn't get much use but is very handy when it does.

The software is where the real magic happens. At first, I had my doubts about Widows 7 media center but had to give it a try because it's the only game in town that decodes premium content like HBO and Cinemax. If you don't need those channels, you could always go with XBMC, OpenELEC, MediaPortal or PLEX. I wish HBO would offer ala carte service so I could have gone with XBMC running on a Linux disto, which would have saved me some cash, but alas I'll have to get my Game of Thrones the old fashion way. Another plus of using Media Center is its ability to use XBOX 360's as extenders. The 360 basically operates as a remote desktop to Media Center which solves that pesky "write once flag" problem that premium channels put on their shows. The write once flag stops hardware, other than that which originally recorded the show, from accessing the data. Two add-ons I installed immediately were My Channel Logos and Netflix.  My Channel Logos dresses up the TV guide data with nice channel icons and adds a couple guide features that makes it a little more user friendly. The Netflix integration is pretty darn good and appears as if originally included with Media Center. I am soooo hooked on streaming Breaking Bad now. In addition to live and recorded TV, Media Center also serves up your DVD's, ripped movies, videos, music and pictures.

Outside of Media Center, I've added a couple of programs that take this rig to the next level. I mainly use Remote Potato to schedule my DVR recordings when away from home but it can also stream recorded shows over the internet. You won't get 1080p but VGA on your wifi attached netbook in a hotel room is pretty good. I also loaded up Shareport4W which enables audio only airplay connectivity. It's nice not having to run a separate piece of equipment to get audio streaming from my iPhone and iPad. Airplay makes playing a quick song or a few minutes of Pandora really quick and convenient.

Now that the media portion of my HTPC is covered, it's time to address storage and backup. At the moment, I have Windows running a weekly backup of all my library directories. That pretty much covers all the pictures, music, movies, recorded TV and videos stored on the PC. This is bare minimum and does a nice job covering my rear in case one of the disks fails but it's not ideal by any means. I plan to purchase additional storage and run RAID 0 on the main disk while creating a full system image to store on the secondary drive. That should cover me against failure and provide an easy and fast way of restoring the PC in case anything major happens.

I've had a really fun time researching and building my HTPC. And the fun continues because there is always something to add or tweak to make the system more feature rich. Not only does it serve as our portal to live or streaming media content, it has a seemingly infinite amount of storage space for recording said media. It also serves as the central location for all our music and pictures which is helpful because my wife and I previously had it strewn about to more than 6 devices. That was a source of much frustration. My favorite part is the flexibility that running a PC in the living room provides. We can do things like picture slideshows, video conferencing, games, TV, streaming music from Pandora or Songza, surfing the web, writing this blog, youtube, watching movies, email, and much more right on the big screen. There are a few minor downsides though. With a cable card, you lose the ability to do "on demand" programming through your cable provider. This isn't a huge deal because HBO and the like have all their stuff online and there are many other sources for online movies like Netflix, Redbox, iTunes, Amazon streamin, etc. Another downside is the upfront cost. Again, not bad considering what you save on rental fees. We will pocket about $500 a year which was close to what the HTPC cost so that's our break even point. After that, it's gravy. Building a HTPC isn't for everyone but if you like to tinker with computers or know me, you should give it a try.