Electropong is going to change everything 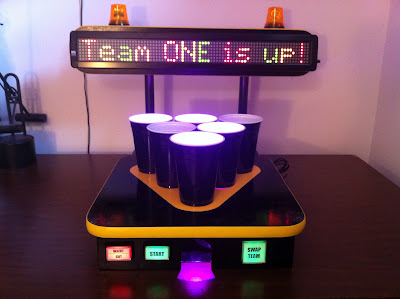 I've been playing beer pong for the better part of 20 years. During that time, the tried and true setup and rules of the game really haven't changed that much. Why mess with a classic. Sure there have been many variations on the table used, certain house rules that one needs to entertain, and everyone has there own style of toss; but the core essence of the game has stood the test of time. I'm looking to shake that up a bit.  Introducing Electropong!

Feel like playing beer pong during the winter months but your brew freezes before you get a chance to throw. Wanna play inside but your significant other will raise hell if you get beer on the new carpet. Tired of wondering what germs you're passing around drinking out of the same cups everyone else is. Electropong may be just the game you're looking for.

Alright, I'm not here to give you the sales pitch, I just thought it would be neat to build an electronic beer pong game. It's very much like the electronic darts game machine you might find at a bar. Two teams play on one unit and hit the "swap team" button to cycle their turn. The color of the cups and the LED display keep track of which team is currently throwing. Each of the six cups has a RGB LED embedded inside and a hole at the bottom so a 40mm ping pong ball can pass through it. Under the cup base, the enclosure houses six IR interrupters, a 9V AC/DC power supply, a custom LED driver board (recycled from an old project) and a custom PCB that controls everything. In addition, there are three arcade style buttons on the front face that also have RGB LED's lighting them up. The display in the back is an off the shelf Betabrite scrolling LED matrix and above that are two mini beacons I got from Woot! The control board has a PIC18F6622 micro-controller that reads in all the IR interrupter inputs, talks to the LED matrix display, does PWM for the LED drivers, toggles the beacons and keeps track of the game play. I think that pretty much sums up the hardware section.

The real magic happens in the software. You can play games on Electropong that wouldn't be possible with the traditional setup. For instance, a popular game with my guests has been "king of the hill" where teams go head to head on the same board and try to be the first to light up three cups of their color. This game tends to go faster than regular pong and is a good fit for people who want to play a quick game and get back to the party. I'd still like to add one or two more games so if anyone has an idea, please leave a comment.

The construction of this game definitely wasn't without it's challenges. An un-tethered Solo Cup with about two ounces of beer in it sitting on a wet surface has some mechanical dampening properties that are difficult to simulate. At first, the cups on Electropong were rigidly fastened to the base with four screws. This caused the ping pong balls thrown at them to ricochet off dramatically. Turns out, the necessary shock absorption system was built right into the cups themselves. About a quarter inch of the outside diameter of the cup base sits squarely on the ground while the rest of the base is raised about an eighth inch. The screws attaching the cups were pressing this raised portion down so backing the screws out a little allowed the cups freedom to pivot a bit. However, in doing so, the imprecise holes I made in the cups allowed too much movement and they ended up not lining up correctly.  I fixed this by laser cutting a donut shaped spacer that fits in between the screw heads and the bottom of the cup. This locked the cup in place and still allowed it to pivot, effectively dampening the force of the ball against the cup.  The second significant challenge was reigning in the size of the unit, especially the height.  If the cups were offset too much from the table top, they would look awkward and the game-play would suffer. However, I still needed to concoct a ball return system. I ended up cutting away some of the base and putting the ball return ramp in its place. Had to go back to my junior high school trig skills to figure out the angles. I was very proud of myself.

Purists will object to certain aspects of the game that have been taken away like the rush of having to drink from a selected cup but I think I have made up for that with the additional games and the spectacle of lights. I don't want to compete with the traditional game, I want to add to it.  But hey, my party guests really seem to like it. I guess that's what matters most.

Oh, one more thing. There is a reason the cups are black. Aside from the obvious styling advantage, I needed to go with black so the light from the LED wouldn't bleed out through the cup. I initially wanted red cups but any hint of red light would make them glow like a lantern. And I think black makes the game look cooler, what do you think?
Posted by Evan Flint at 9:01 AM 29 comments: