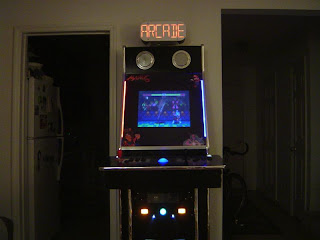 Ok, can you really have a multi-functional arcade machine / Jukebox without a display. Didn't think so. Since the whole machine is pretty much scratch built I didn't think it appropriate to throw some off the shelf LED matrix display up there so I decided to whip up something on my own. Here's how it began. Since the overall theme for the box is old school meets modern, I needed to figure out a way to introduce a dash of late model style to some outdated tech. As luck would have it, I already had just the thing in my parts box. Maxim's multi-segment LED character driver IC (MAX6954) would do just the trick. The only thing better than some retro alpha-numeric action would be rockin a few Nixie tubes. And don't think I wasn't considering it. I still beam like a proud father at the wiring job. Though, bet your bottom dollar that I'll be makin some printed circuit boards if I ever decide to wire up 84 LED's again.
At the moment, the display only cycles through a pre-determined sequence of words and symbols but it's connected to the arcade's PC via the serial port so it'll eventually (sooner than later) display high scores and game titles. Neat huh? I dropped off some design elements halfway through construction so I think I would have approached this differently had they not been there at the beginning. Being that I was initially constrained by size requirements, the character spacing is a little closer than general standard practice and I didn't utilize all of the LED driver chip's available characters. But I'm still pretty happy with the way it turned out so I can't complain too much. Wanna see a video?