The Christmas spirit is strong with these two 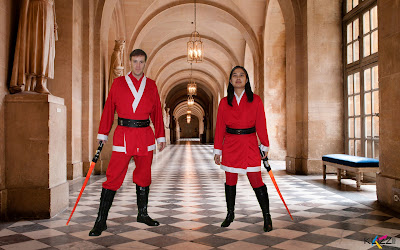 I've always wanted to make a Jedi costume. There, I've said it. Can't fly your geek flag any higher than that. I don't belong to any sort of Star Wars fandom guild, nor do I care to join one, so that pretty much narrows down the opportunity to wear said costume to Halloween. Problem is, I usually wait too long and any involved costume idea is relegated to the following year which then repeats itself unto infinity.  This year was no different but at least I was motivated enough to start researching the idea a little. At the time, I was also brainstorming Christmas card and Santa suit bar crawl ideas. That's when a vision of the Santa Jedi hit me. Take the getup Obi Wan wears in the prequels, color it red and that's pretty much what the typical Santa wears minus a little fuzziness. So it was early November and the Santa Suit Bar Crawl was on December 1st. The race was on. Not only was I going to made a Santa Jedi costume for myself, I roped my wife into the idea as well. Her desire to make me happy apparently has no bounds. BTW, The picture above was used in our Christmas card.

Your basic Obi Wan Jedi get-up has 6 parts.  This doesn't include his light saber which I will discuss later.

I sourced the knee high boots and baggy red pants from Amazon. They were surprisingly high in quality for the money. The boots came with a fabric shin guard that was held on by three straps.  I liked the way the extra piece looked but not the way it was loosely attached and allowed to shift around. I used black fabric tacks to secure it in place  and hot glue on the inside of the boot to make sure the tacks didn't go anywhere.  My wife already had some fancy "on the town" boots so that worked out nicely.

The faux leather belts were not going to be as easy to acquire. I had to make my own but got some great tips from this tutorial (warning: PDF link). You can get a great idea of what I did from the picture below. An essential tool here was the leather punch kit I picked up from Amazon for about 5 bucks. You're basically hammering a large hollow nail through your desired material. Definitely took a bit of practice on some scrap but once I got the hang of it, smooth sailing. Much of a typical Jedi outfit is borrowed from traditional Samurai attire so with this in mind, the belt is often worn over an Obi or formal waist sash. This was relatively  easy to make from a long rectangular swath of fabric. 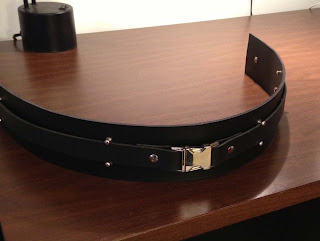 The Jedi tunic is basically a shortened bathrobe so I bought a bathrobe pattern, left off the belt loops and added a little trim to the sleeves and hem. I wanted my wife and I to have slightly differing costumes so I gave her red trim around the collar and lengthened her robe to resemble more of a dress than tunic. I also left off the tabbards to give it a more feminine look.

Ah the lightsaber, an essential part of any good Jedi costume. I already had a rather inexpensive Darth Vader replica hilt with telescoping red saber and was actually playing with it when I got the whole costume idea. Like I said, it was kinda cheep so a little modification was necessary if it was going to be ready for prime time. The main problem was brightness. The stock incandescent bulb and AA batteries weren't cutting it.  I needed something with a little more kick. I completely disassembled the saber and gutted the housing.  I replaced the battery pack with a 900 mA hour lithium polymer battery and the bulb with a 3 watt white LED. I easily upped the perceived brightness by about tenfold. It may have been slightly overkill considering the large slug of  aluminum necessary to help dissipate the heat. I also painted the inside of the hilt white to help channel the light into the saber portion. This new excess of light was also a problem for the fogged plastic window about half the way up the hilt. Too much light was shining through the window so I made a custom PCB that blocks the light and replaces it with six small red LED's that scan back and forth.  Definitely adds some cool factor.  In a mostly dark room, these bright red fully extended sabers really made the costumes look legit.

The only thing really missing from this ensemble is the full length jedi robe. With a little more effort I could have pulled something together but ultimately decided against it  for a couple of reasons. It probably would have been to cumbersome in crowded bars and the rest of the costume looked so good, I didn't want to cover it up. That and the cost. Man, decent fabric can get expensive!
Posted by Evan Flint at 1:28 PM 5 comments: