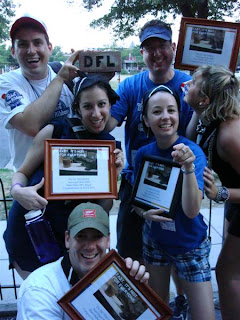 There's nothing wrong with being dead last if you're doing it for a good cause. Headed out a little while back for the annual SMASHED DC Scavenger Hunt. Now, with a little cross team teamwork and possibly a bit of dishonesty, we actually managed to win the thing last year. Sometimes you have to play above the rules. And winning is all well and good but we needed more of a challenge this year. That and we felt like fraternizing a little more along the course. Contrary to what you may think, coming in last is kind of hard to do. We needed to actively try to get rid of points both real and fabricated. We got a kick out of making people sing Def Leopard songs for fake points. It's the little things.

Our Team theme was "isn't it obvious". In a nutshell, we all dressed to a rhyme scheme. For instance, Cuckoo Hebrew, Haiku Guru, Blue Crew, Voodoo. You get the point. We made people guess the theme and no one did. I guess it wasn't that obvious.
Posted by Evan Flint at 12:11 PM No comments:

I recently recreated my Knight Rider Belt for a trip out to the State Theater to see the Legwarmers. The original belt died after the party for which is was built. Not too surprising really, it was sort of a last minute thing and the construction wasn't that solid. Normally I would have called it a project and moved on but I was never really happy with the way the light diffusion worked in the original so I instituted a few new tricks and put together a far superior product.
Posted by Evan Flint at 10:58 AM No comments: 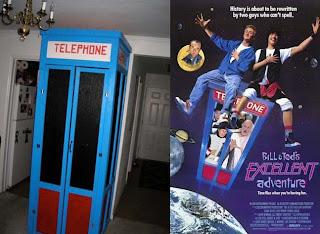 So here's what we built for our latest 80's party. If you try hard enough, I think you can guess the theme. The idea first came to me when my roommate Rhett and I were studying for our high school history final. I was kind of stressed cause if I didn't pass, my father was going to send me to a military academy. And that was a real possibility since I know nothing about most pop culture historic figures. I thought, if only there was a way to travel back in time and accidentally gather up said figures due to situationally comedic events that necessitate their coming back to the present with me just in time to help us give our history final oral presentation. Then I thought, wait... this was kinda already done in a movie and besides, everyone knows that you totally need a flux capacitor for time travel. So we axed the time travel idea and decided to build the phone booth anyway. I painted the whole inside black and mounted a couple black lights to its ceiling so party goers could write anything they wanted on the inside walls with a highlighter pen. Indecent verbiage and caricature was kept to a minimum. Best thing about the booth... it was still standing when the party was over. I don't know if that's saying more about the quality of the party or the construction of the booth. Nah, it was all booth baby!
Posted by Evan Flint at 2:01 PM No comments: 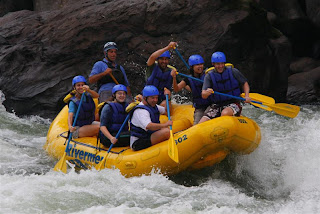 Met my sister in West Virginia a little while back (July '08) for a little camping and white water rafting trip. Never to miss an opportunity for adventure, Debbie decided to accompany me. While it was her first time out, I had already gone once in Colorado a few years ago. A good time was had by all. However, I can say with certainty that I will be seeking a bigger class of rapids on my next outing. The 4's on the Lower New River still provided a good amount of energy but the time to really go is on the Upper Gauley River in late September when the annual fall releases from Summersville Dam create some really great drops... or so I hear. I'll have to try it for myself. Probably not this year though. It took about 5 hours to get there from DC. It's time to think about saving those road trips for ski season. It can't get here fast enough.
Posted by Evan Flint at 12:07 PM No comments: 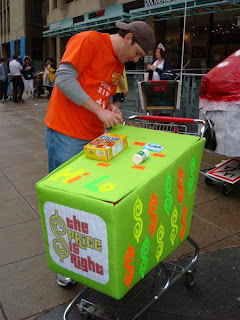 Ok, the 2008 SMASHED Idiotarod was a few months back but totally worth a late post. for those who may not know, SMASHED is a DC philanthropic organization dedicated to enabling the childish side of any who wish to participate in their charitable outings. For instance, why else would we race shopping carts through the streets of downtown DC if not to let loose a little and help out a worthwhile charity like Miriam's Kitchen.

We ended up finishing somewhere in the middle of the pack but that's Ok cause it really isn't about winning for me. I just like decorating the cart and the afterparty... which was a total blast. And I think the cart turned out really well too. Thanks to Debbie Lee for thinking up a great theme. I wanted to give the cart that "puffy" look of the unmistakable 70's style TPIR sets. It was actually pretty easy to pull together with some semi-stretchy lime green fabric, medium density cotton batting and a few pieces of rigid cardboard. And of course no project is complete without hot glue and duct tape.

One Point Twenty One Jiggawatts! 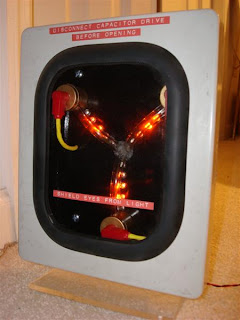 Ok, so i had way too much time on my hands so I decided to recreate the Flux Capacitor from Back To The Future. Actually I needed a costume for our annual 80's party so put one Flux Capacitor on top of some shiny silver clothing and wham! You've got yourself a Delorian costume. In theory at least. I had some last second power issues so I couldn't pull it together. Stupid regulator not running at 4.6Vdc. But it works now so it makes a pretty interesting decoration when I'm not using it to travel in time. And if you're wondering, we still don't have rocket packs or flying cars in 20 years. So so lame.

This thing really wasn't too hard to pull together. The casing is just a outdoor panel box which I chopped to decrease it's overall depth to about 3 inches. I made the front window with some plexi and rubber molding. I really like how that turned out. The rest is a bunch of amber LED's, a role of clear tubing, some paint, three right-angle RCA housings, some yellow wire and a few 1" PVC caps. Personally I think it looks better than the real thing. But I'm a proud geek so that's not too surprising.
Posted by Evan Flint at 8:57 PM No comments:

The Best Boards In Life Are Free

Many of the projects I embark on or ponder constructing need some sort of electronic control. Mostly it's driving LED's but I still do a lot with motor control, servo interface, IR receiver, and PC comms. In the past, when in need, I'd throw together a perf-board circuit a little something like this. While an inefficient use of my time, it did provide a good learning platform and I didn't have the tools to do anything better. However, that has changed. Now, I will be using the e-unit PIC18F6622 breakout board. Thanks to the good people at Mentor Graphics, laying out this little gem was a breeze. I wanted to make a board that could serve as a stepping off point for any project I wanted to build. It's basically a bare bones design with pretty much all of the general I/O ported out to the header on the near side. Though I did include a few things that would make life easier like a RS232 level shifter, IR receiver and status LED's. Best thing about this board... it was free. Many printed circuit board manufacturers have first time buyer deals but Advaced Circuits has just about the best I've seen.

There are many types and makes of micro controllers out on the market but I like the Microchip PIC controllers because... well there are many reasons: good development tools, inexpensive, high performance, good community, etc. The PIC18F6622 is a good all around chip. It's got plenty of I/O, a couple of UART's, an I2C interface, on-chip A/D converters and it runs up to 40MHz. You're not going to do fancy signal processing on this but it does have enough smarts to handle a control system or two.

You may be asking yourself what I'm going to do with this board now that I have it. Funny you should ask, I already have something in mind. I have a few audio sources in my bedroom that run into the same amp and speaker setup. Currently I switch between them by manually depressing the appropriate button on an audio mixer. I'd love something that would autodetect what source is active and switch to that. A preamp volume control would be nice too. But that's another posting altogether.
Posted by Evan Flint at 8:52 PM 1 comment: