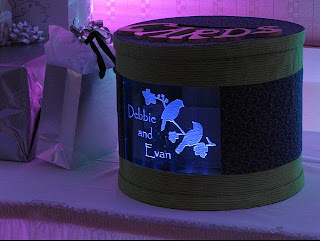 And lights up of course.  One minor detail in the vast expanse of wedding preparation is the acquisition of some sort of receptacle to house cards or envelopes that may get lost in the shuffle of larger items on the gift table.  I suggested to my soon to be wife that I could handle the task of building such a thing and she happily accepted knowing full well what the outcome would be.  I appreciate her willingness to support my hobbies and obsessions.  And so it began.  Don't forget to watch the video at the end, not bad for iPhone video huh.

Among the design considerations I mulled over, I felt color scheme and an interactive element took precedence over the rest.  Sure, the box contains a few old tricks but incorporates enough new (to me) tech to satisfy my desire for an original product.  Most of the time my designs are influenced greatly by the available materials and tools at my disposal.  This project was no exception.   How hard is it to find a lightweight and inexpensive yet sturdy cylindrical box big enough to hold approximately 70 large envelopes?  Too hard, I basically had to make my own out of two hat boxes, tape, some brown utility paper and a lot of glue.

Let's start with the new stuff.  Our wedding colors were purple and green so the box had to match the particular shades we selected as close as possible.  Probably could have done it with paint but decided fabric was better for a few reasons.  On the top of that list, Deb got me a sewing machine for my birthday so I was itching to do more than hems and patch jobs with it.  Plus, fabric does a great job of hiding blemishes and rough edges.  Turns out there were plenty from the aforementioned hat box mod.  And the fabric store had plenty of colors and patterns to pick from.  A little too many perhaps, it was hard to decide.

Since people were going to be interacting with the box by putting cards into it, I thought it would be a good idea to provide some feedback.  Oddly, I've never worked with photointerruptors before but it was obviously the perfect way of sensing something entering the box.  When a card blocks the infrared light between transmitter and receiver, a signal is send to the microcontroller.  I thought it appropriate that the micro respond by flashing some green lights.

The focal point of the card box is of course the etched plexi with our logo on it.  As you can see from the previous posts, we kind of liked it.  I etched the plastic in the same manner as I have in the past but finished it in a different way by bending it to match the contour of the round box.  I think it ties in quite nicely.

This was a fun project.  I learned a few things in the process and everyone at the wedding seemed to get a kick out of it.  I guess it's my silly way of saying thank you for all the gifts.

Posted by Evan Flint at 3:29 PM No comments: