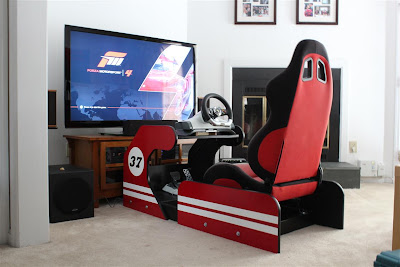 I've always liked how competitive the guests on Top Gear get while running their lap. It's obviously the show's signature segment and has to play a part in getting stars to appear on the program. For those unfamiliar with the show, it mainly showcases high end vehicles and various producer crafted adventures for the three hosts. It is also part talk show and ends each interview with a discussion about how the guest thinks he or she performed during a lap around the Top Gear test track in a reasonably priced car. It's all in good fun and I thought I could capture a little of that during a party at my place a few months back.

Ever since my friend Mark gave me a gaming wheel a couple years ago I've been thinking about building some sort of cockpit to enhance my driving game experience. At the time, I didn't have the room or the time so it got put on the back burner... until now. I was recently brainstorming for fun party activities while watching an episode of Top Gear when I realized I could build a driving rig and have guests run a sim lap to mimic the experience. I'd also made a top ten board to introduce a little competition into the mix. There are relatively inexpensive rigs already on the market but they are still at least a couple hundred and I thought I could do better and on the cheap. And what fun is buying when you can make it yourself.

I was toying around with a few ideas but decided to concentrate on finding a good seat and build from there. To my surprise, ebay wasn't much help here. There were some acceptable options around the $150 mark but I designated those as a fallback option. What I really wanted was the stock seat out of a junked newer model corvette or f-body. Surely the salvage yards would yield something I could work with. I was incorrect in assuming I could find an inexpensive option. And guess what, the junk yard managers I contacted weren't the most helpful people in the world. This was looking like a dead end until I visited a Pick-and-Pull in Virginia Beach during a trip to the in-laws. After about an hour of ripped leather and stained cloth seats, a ray of light shone from the sky upon a gnarled up baby blue WRX tucked away at the far corner of the lot. It had graphics on the side and after market ground effects. Oh, this had to have a good seat for me. The drivers side seat was beaten into submission but the passenger side throne was definitely something I could save. I little sun and water damage wasn't going to stop me. I unbolted it from its rusting grave and carried it back in 95° heat the quarter mile to the sales office. Sweating and tired, I argued the sales guy down to 50 bucks. Not a great deal but I wasn't going to leave the seat there and he knew it. During the couple hours it took to clean the seat fabric and rebuild the horizontal sliding mechanism, I frequently questioned the wisdom of buying a used seat. However, after finishing, I was glad to have saved the old lounger and given it a new lease on life.

The chassis took a bit of time to sort out. I'm not sure why I instantly start thinking of PVC pipe when a project like this comes up. I guess it's easy to transport, relatively light weight and somewhat straight forward to cut but looks unrefined and can have sturdiness issues if done incorrectly. I ended up going with MDF, the old standby. I've got the tools that make shaping it effortless but getting a 4'x8' sheet home is daunting to say the least considering I don't know anyone with a pickup truck. I fixed that issue with a slight redesign. I made the rear side panels by halving an 8' x 11" MDF strip and I cut the front panels out of a 4'x4' board which is much easier to negotiate from the car into my house. The frame that holds everything together is fashioned out of 2x4's. What do you think of the paint job? All it took was a couple spray cans of red and white along with a little brushed on black gloss. Amazing what you can do with some painters tape and a lot of patience. I attached the panels to the frame with a bunch of lag bolts, extra large washers and nuts. The wheel and pedal decks added a bunch of rigidity to the structure so cross members weren't necessary. The whole thing actually breaks down rather easily and can be stored in a minimal space. That was something I carefully considered during the design.

Picking the right game was oddly the hardest part of this project. The wheel I had only worked with PC and Playstation 2/3. Seeing as though I don't own a Playstation of any kind, I started researching PC driving games with emphasis on finding one that included the Top Gear test track. I underestimated the difficulty in finding a PC driving game that would suit my needs.  I required something with minimal setup, the ability to race and re-race continually, easy enough for the casual gamer, hard enough to differentiate skill levels, and a menu screen that shows lap times when the race is finished. I also wanted a format where the racer was alone on the track.... again, like Top Gear. Turns out, this wasn't meant to be in the world of PC racing. Most games revolve around free world racing like the Need for Speed series or are geared towards career mode game play like GTR Evolution or rFactor. Oh and BTW, my HTPC with integrated video ran GTR Evolution like a champ. The video settings weren't nearly maxed out but it looked great in 1080 resolution. I decided to broaden my search  and after a bit of digging around, Forza 4 for Xbox 360 kept popping up. I already owned a console and the game cost just 16 dollars online so giving it a once over was a no-brainer. Forza almost had everything I wanted. Is it so hard to pick a car, pick a track, go for a quick spin and check your times? Apparently so. You can get out on the track but you can't choose a pre-determined end lap unless you race with other cars. Figuring that Forza was by far my best bet even with it being less than ideal, I endeavored to match it up with a wheel comparable to what I already had.

There are and were few wheels on the market made specifically for the 360, one of which was made by Microsoft to accompany Forza Motorsport 3 when it debuted a few years ago. A co-worker at the time had some nice things to say about said MS wireless force feedback wheel so I went on ebay looking for a deal and scored one in great condition for a song. The steering wheel is on the smallish side and the whole thing feels a tad plastic like and toyish but the next step up was a couple hundred bucks so the MS wheel would have to do. On the plus side, it does have some feedback on the steering wheel, which when going over bumps and trying to grip turns, feels pretty neat if you pay attention to it. The pedals don't offer much in terms of resistance or realistic feel but again, they would end up serving their purpose nicely. The wheel comes with a large clamping mechanism for temporary attachment to a desk or table. While is was no doubt designed for strength, I had a hard time believing it would weather many hours of rigorous game play in a party environment. I bought an after market adapter and fastened the unit snugly to the wheel deck using yet another adapter I made out of some scrap wood. A lack of mounting holes on the underside of the wheel base is a design flaw in my opinion.

What's the use of racing for time if you can't show off your skills and post your accomplishment for everyone to see? Yet again, I followed Top Gear's example and put together a metal leader board with magnetic dry erase strips. I made the strips re-writable because I only provided 10 during the party to encourage a little competition. There are more strips in the picture above because the rig still lives on in my office and house guests are invited to take a lap if they are so inclined. I made the strips by combining a 8 1/2" x 11" self adhesive dry erase sheet with a 8 1/2" x 11" sheet of printable magnetic paper. I cut the resulting sheet into strips and whoa-la.

The party was an afternoon outdoors affair during the summer so guests who wanted to escape the sun for a moment were invited to walk inside and take a turn or two. I deliberated for some time on how to set up Forza for the party. I landed on the following racing conditions:

I originally wanted the driver to be alone on the road. However that wasn't a good option because that mode is free run with no way to define a "finish line".  I went with quick race mode and set the AI to medium. A decent driver would quickly outpace them anyway. Those not as skilled would still have a good time battling their competition through the curvy ups and downs of the scenic Bernese Alps.

The rig ended up being a big hit at the party. It had constant use for about 10 hours with there being a line for most of the day.  I just wanted people to enjoy themselves and it was quite apparent that I accomplished my goal. Now all I have to do it build another one so I can have head to head race battles. That's taking it to the next level.