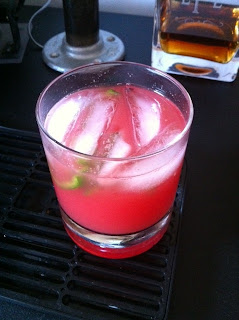 On a trip out to Cosi a little while back, I sampled their Watermelon Habanero Lemonade and was thoroughly impressed.  Sweet, spicy and very refreshing.  I really needed to make this into a cocktail. On a recent sunny Sunday afternoon I sequestered myself in the kitchen endeavoring to do just that. I was going to start with store bought lemonade but my wife suggested that I take a look at Emeril's Watermelon Limeade recipe before I do.  Always with a good idea up her sleeve, I listened and whipped up a batch.  Start with 8 cups of loosely packed watermelon (seeds removed) and blend until liquefied. Strain until all the pulp is removed. You should be left with about a quart (4 cups) of juice.  Add one cup of fresh lime juice along with a half cup of sugar and you're done.  This in itself is very tasty but it's not a cocktail just yet.  Cosi used Habanero peppers in it's drink but I'm a huge fan of Jalapenos so I went that route. Cut the peppers in half lengthwise and scrape all the seeds and pulp out with a spoon. That's where most of the heat is and I'm looking for taste not bite.  Slice the pepper into 1/8" pieces and set aside.  A little pepper goes a long way so when building your drink, start with about 4 half moon slices and add to taste. I associate Gin with summertime cocktails so that was a no brainer. I prefer Hendricks but that can be a bit pricey so Beefeater is just fine. To finish things off I added an equal amount of Club Soda for that carbonated kick.  Tasty drink and fun to make. Though I think I need a better name. Suggestions?

Add Gin, Club Soda and Jalapeno to rocks glass, let sit for about a minute.  Add ice till about 3/4 full.  Top with Watermelon Limeade and stir. Enjoy!
Posted by Evan Flint at 9:54 AM No comments:

Email ThisBlogThis!Share to TwitterShare to FacebookShare to Pinterest
Labels: food and drink

My wife and I own many cookbooks but more often than not we look to the interwebs for recipes. I got my wife an iPad for her birthday when I finally got tired of scrolling through verbose assembly instructions on an iPhone. Prior to purchasing the wonder tablet I knew that our lack of counter space left few options for placing the iPad out of the way yet accessible at the same time. I would have to go vertical.

At first I thought about modifying a COTS (consumer off the shelf) iPad case and mounting it to the face of a cabinet but I didn't feel comfortable swinging the thing around every time we wanted to get a plate.  After hitting a slight creative block, I was inspired by a couple drawer slides I found whilst fumbling around my spare parts box. I could mount the dock to the underside of a cabinet and slide it out and over the sink when it's needed. However, in this configuration, I would only have 1 and 1/8 inches of clearance to work with. Subtracting the width of the iPad (1/2"), the iPad holder (1/4") and the logically minimal width of a sturdy base (1/4")... I was running out of room quickly.  I would have to lay the iPad holder flat against the base and somehow conjure up enough space to fashion some sort of kickstand mechanism.

Knowing that I had no height to work with, I envisioned an opening in the base where the hinged portion of the dock would reside.  I also thought up notches in that opening that would later accept a couple of saw tooth sections to act as adjustable stops for a kickstand. Luckily I have access to a laser cutting table. Otherwise, cutting out the design below would have been impossible with a Dremel.

The kickstand affixes to the underside of the hinged section with a couple of brackets that were also cut out using the drawing in Figure 1. Love that laser. I made the kickstand by bending up a piece of 1/8" tubular aluminum on a vice. There was as little trial and error involved here. I had to get the leg sections the exact same length or else they wouldn't sit on the stops properly. I wouldn't want the iPad to wobble around now would I.

I made the iPad holder out of 1/16" sheet aluminum which I painted a shiny black with a couple coats of clear acrylic for protection.  This is also the case where having the right tools really makes the job easy. Having a good sheet metal cutter and bender makes all the difference. I left a little slack around the iPad to put a thin felt pad to minimize scratching but turns out the current finish is soft enough and any additional material may not be necessary.

There are a couple things I would have done differently had I owned the house. First off, building the drawer slides into the cabinet so it's totally hidden when not in use would have been really neat.  I'll shelf that idea until I put up some custom cabinets of my own.  Next, having the whole thing motorized would bring this to the next level. Completely unnecessary but cool none the less.  I had that notion from the very beginning so I designed it with that potential upgrade in mind. Though I have many more projects in mind so that will have to wait for another day.
Posted by Evan Flint at 9:28 AM 5 comments: