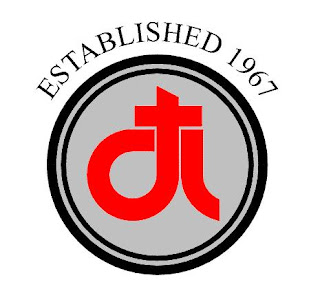 After a slight hiatus from the working world, e-unit is back in the saddle... or ergonomic office chair as it were. Here's an interesting statistic, general street crime rates fell 20% during the time of my non-employed status. Coincidence? I can't substantiate those numbers nor can speak on any correlation you may or may not draw from them but I can say this... I'm still out there suckas, just not between the hours of 8 an 5. Petty theft, that's a'beatin.

So I'm workin for Commonwealth Technology now. I pretty much get to design and build stuff like all day long. Big stretch huh? And they've got some pretty nice tools here. It's a little different mindset from working on projects with only an exacto knife and a hammer at home. Hmmm, maybe the stuff I make at CTI may actually work. I'm not holding my breath though.

Speaking of hobbies, I have a couple projects nearing completion so they'll be posted here in the next couple of weeks. I've got my sister's etched bar sign almost done and the communication code for the e-unit arcade display is nearly bug free. Will this thing ever be done?

Posted by Evan Flint at 4:47 PM No comments:

Plexiglas, the other clear synthetic polymer of methyl methacrylate. 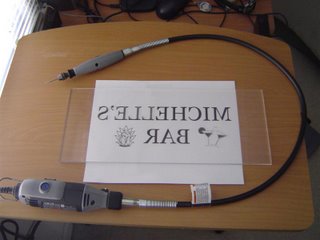 I wouldn't consider myself a controlling, type "A" personality, but I do push plexi around quite a bit. I've cooked it, bent it, drilled through it, sanded it, polished it, cut it, cracked it, and scowled in its general direction quite a few times. And I'm not done yet. I have the technology, means, time, and minimal artistic ability to etch me some plexi so that's what I'm gonna do.

My sister has a shelving unit with a few select spirits adorning it so I thought I'd etch her a nice sign so no one confuses it as anything less than a full fledged drink barn.

After a few internet searches, I determined a good plan of attack for the project. First thing I did was throw together some fontage and a couple clipart images. When I was pleased with the design, I flipped it and printed it. Oddly enough, that turned out the be the hardest part of the project. The etching was a breeze. It wasn't so much me as it was the Dremel tool. It's good. The trick is to hold the rotary tool firmly enough so as to avoid marking outside of the lines but gentle enough to allow for finer details. Not so easy when you're working at 5000 rpm's. There is more work to be done though. To make the etching really pop, I'm gonna light the thing up with some RGB LED's. 12,000 mcd's is a little overkill don't you think. Yeah me too... 12K it is then. I already have the color code drivers written for my fav PIC micro so all I have to do is solder up some components and make a cool frame. Don't know how the frame should look just yet but I'm sure I'll think of something. Updates to follow.

Posted by Evan Flint at 2:29 PM No comments: