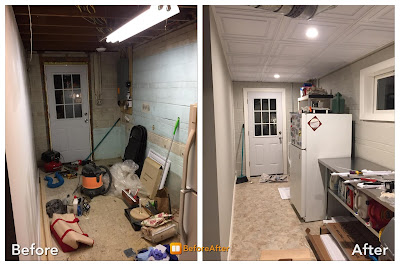 Our utility room was pretty beat up. We didn't take people down there. It's on the lower level at the rear of the house and was generally avoided. It would have been nice to tackle this room first but there were too many issues with the design to justify beginning the project until many of those questions were answered. Leaving the room unfinished for a while worked out in our favor though. Having a climate controlled space that you don't mind getting a little nicked up can be very useful. Many things were painted, cut, nailed, and glued down there during the hot and cold months.

Pretty much everything down there was replaced. I started by replacing the exterior door and window. A run of the mill steal door at one of the big box stores can be very reasonable. You pay a little more for the glass but it hardly breaks the budget. The exterior of the house at the door opening is brick and the door would be inset which means that there would be no wiggle room for the attached trim if it ran a little big at the factory. It couldn't have fit more perfectly. It brings a smile to my face every time I walk through it. The window fit just as well but I had to get a little creative. My regular outlets didn't stock a replacement window with the rough opening that I needed so I bought a "new construction" window that was a little smaller but had nailing flanges. Again, the exterior of the house at the window opening was brick and the window would be inset. There was one continuous flange around the outside of the window so I cut the corners effectively making four flaps. I used masonry screws to attach wooden stops to the inside of the brick and cinder block rough opening where I wanted the window to sit. Using a heat gun, I softened up up the flanges so they would easily bend and slid the window in from the outside. When the flanges cooled, they locked the window in place. They also provided a good caulking surface. Result! 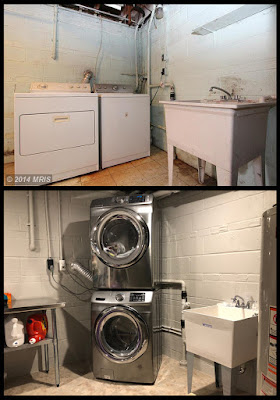 I bought a paint sprayer a while back anticipating that I was going to paint the exterior of the house. I didn't consider spraying any of the inside until it came to resurfacing the cinder block walls of this room. I wasn't looking forward to rolling the paint in this room because of all the exposed pipe and uneven surfaces. Spraying would take care of all of this but prep is crucial. I spent a couple nights taping up everything. The floor wasn't down yet so I wasn't terrible worried about over-spray but I ended up brown-papering the ground anyway. I am a huge fan of the sprayer now. It was a lot easier than I thought it was going to be. I'm actually looking forward to spraying the outside of the house now.

I was back and forth a lot over what flooring to put down. I ended up going with the $1 per square foot cheep self adhesive vinyl stuff you buy at Home Depot. I know a lot of people aren't fans but I think it turned out great. Clean up is easy, it's super affordable and it's a breeze to put down. I'll go high dollar in our livable spaces but willing to save a few bucks where I can. It's been months and I haven't had an issue with it. I'm happy.

We rounded off the renovation with a new stainless bench, utility sink and a sweet washer and dryer from Samsung. Gotta thank my neighbor Pete for suggesting the stacked corner install. Love it. Although I did have to change the plumbing a little to make that work. Working with PEX made that easy though. That stuff is the real winner here.